February 2020 – Thanks to the success of the 2019-2020 Annual Fund and a generous anonymous donor, All Saints upgrades entire school with next-generation ActivPanels.

February 2020 – All Saints selected by the United States Department of Education for a site visit.

April 2019 – Mrs. Stefanie Hargen, Assistant Principal, is a featured speaker at the 2019 Conference of the National Catholic Education Association (NCEA).

September 2016 – Purchase of three mobile labs of Chromebooks plus additional iPads for the primary grades.

May 2016 – Students working toward project to Build a Home in Bánica in the Dominican Republic.

November 2013 – All Saints Establishes Robotics Partnership with Leidos
As part of our emerging STEM initiative, all 7th and 8th grade students will participate in virtual robotics in the computer lab through a web-based program designed at Carnegie Mellon and purchased with proceeds from the 2012-2013 Annual Fund. As students develop basic skills related to design and programming, those interested will have an opportunity to participate in a Robotics Club. With the funding provided by Leidos, we look forward to introducing this exciting after-school, hands-on activity during the second semester.

January/February 2011 – All Saints Selected School of the Month
All Saints Catholic School is pleased to announce that it was selected by Today’s Catholic Teacher as its January/February 2011 School of the Month, in recognition of the distinct manner in which the Peace & Justice Players program blends faith and service to the benefit of the community.

Starting in the 2016-2017 school year, All Saints began using Scantron as its standardized testing program.  Rather than administering Terra Nova in the spring, students complete three shorter series of tests in math, reading and language arts in the fall, winter and spring.  As the testing takes place online, teachers have access to immediate results and data.  Additionally, as the test is driven by technology, it is adaptive in nature, with each test being customized to the ability of each student.  Administered three times over the course of the year, it provides data with which the teachers can tailor instruction and measure student growth.

You can find out more by reviewing a Parent’s Guide to Scantron Testing. 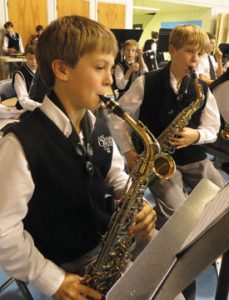 The Benefits of a Catholic Education
Our curriculum at All Saints focuses on the attainment of knowledge and skills necessary for the student’s spiritual, moral, intellectual, social and physical development.